The Fairfax County Department of Transportation will hold a virtual community information meeting on the widening of Route 28 from the Prince William/Fairfax County Line to Route 29 on Thursday, June 17, at 7 p.m. The purpose of the meeting is to update project status; discuss the Land Acquisition process; and present the findings of the Final Noise Analysis and discuss noise barriers proposed with the project.

To attend the meeting:

Comments will be accepted through Friday, July 9, 2021. To send questions and feedback:

In May 2021, the Route 28 Widening Project moved into its next phase, with night work and single lane closures affecting the entire length of the project. Shirley Construction Company (SCC) began mill and overlay of the entire roadway on the evening of Sunday, May 2:

On completion of overlay, SCC will provide pavement striping and signing, generally as noted on the 90% Plans; then shift traffic and Install barriers as shown on the 90% plans. This will enable work to begin on new roadway construction as soon as final plans are approved, with minimal impact to traffic flow during peak commuting periods.

Providing this early mill and overlay advances the initial paving operations from the original schedule of Spring 2022. The advanced paving work will repair any existing potholes, reduces the possibility of further deteriorated asphalt, and seal the joint between the recently installed temporary shoulder pavement and existing pavement.

The first stage of construction, recently completed, included paving and strengthening portions of the existing shoulders along the entire length of the project, specifically:

All work is weather dependent and will be rescheduled if inclement conditions occur.

Prince William County hosted a virtual information session on Monday, Dec. 7, 2020, to inform residents of both counties about the Route 28 Bypass Project, including proposed concepts for the Route 28 Bypass connection and tie-in point to existing Route 28 in Fairfax County. Details and meeting recording will be available at http://route28bypass.com/.

Route 28 serves residential and business destinations from Remington in Fauquier County to Route 7 in Loudoun County, connecting Route 29, Route 234, I-66, Route 50, Dulles International Airport and Route 267 in between. The corridor has experienced increased congestion for many years, particularly in Prince William and Fairfax Counties south of I-66. To address this congestion, the Fairfax County Department of Transportation (FCDOT) proposes widening Route 28 for a distance of approximately 2.3 miles from the existing bridge over Bull Run to the interchange at Route 29. The project includes:

The project was endorsed by the Fairfax County Board of Supervisors as part of the County’s Transportation Priorities Plan (TPP) on January 28, 2014 (Project ID#62).

Fairfax County and the D-B contractor will coordinate with property owners well in advance of construction. Work hours are set by VDOT and Fairfax County. Night work is likely. The D-B contractor will be required to maintain pedestrian and vehicular traffic and signals during construction. No lane closures will be allowed during peak travel hours. 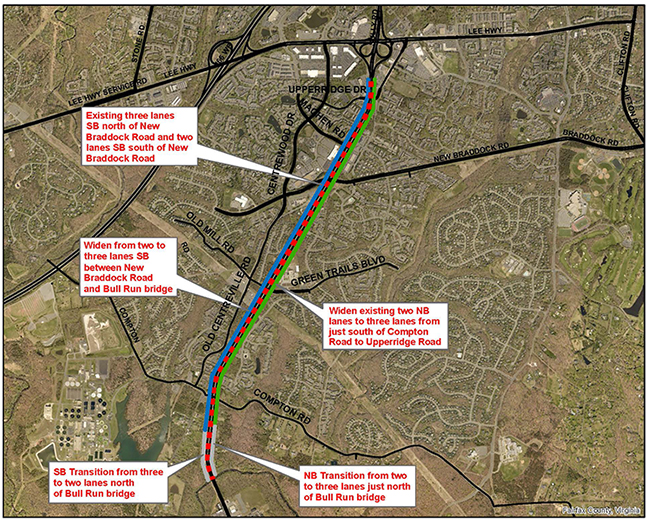 FCDOT ensures nondiscrimination in all programs and activities in accordance with Title VI of the Civil Rights Act of 1964 and the Americans with Disabilities Act (ADA). If you need this information in an alternate format or would like to request reasonable accommodations for persons with disabilities or limited English proficiency, contact FCDOT at 703-877-5600, TTY 711. Requests for assistance must be received at least 7 business days in advance of an event.

During the second round of SmartScale project selection, the amount of SmartScale funds received was $32,830,000. The initial SmartScale funding award included the repurposing of $9,407,418 in Federal Demonstration funds. These funds have an obligation deadline of September 30, 2019.

Under a Design-Bid-Build procurement schedule, FCDOT would not be able to satisfy this obligation deadline since the construction advertisement date would be approximately October 2022. However, per discussions with VDOT, the obligation deadline for these funds would be met if FCDOT utilized the Design-Build project delivery method since funds for Design-Build projects are considered to be obligated for construction once the Request for Proposals (RFP) is advertised.

A Design-Build RFP could be advertised in late Spring 2019 which will be well in advance of the September 30, 2019 obligation deadline.

FCDOT anticipates advertisement of a Design-Build RFP in the  Summer of 2019.